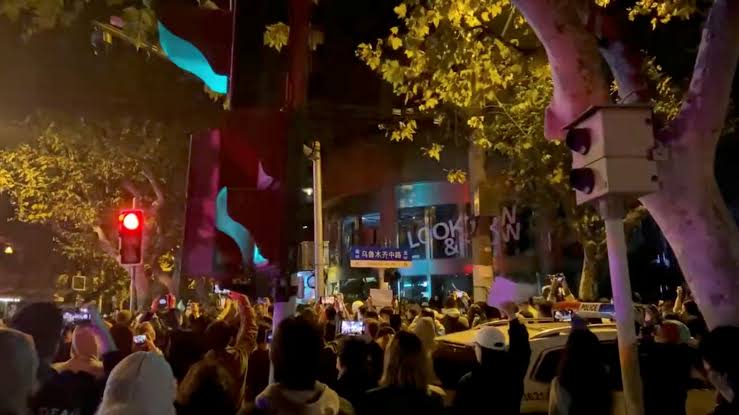 In an unprecedented show of resistance against the Xi Jinping regime and Communist party in China, thousands took to the streets in major cities including Shanghai, where hundreds chanted “Step down, Xi Jinping! Step down, Communist Party!”. There were protests at several Chinese universities as well, CNN reported.

On Thursday, a deadly fire at an apartment in Xinjiang, the country’s far western region, killed 10 people and injured nine. The incident seems to have sparked the mass protests, mainly after a video surfaced which showed that lockdown measures delayed firefighters from reaching the victims.

As per witnesses and social media accounts, on Saturday and early Sunday morning, protests broke out in cities and at universities across China .

As the unrest grips the country, the Chinese police have clashed with thousands protesting the country’s draconian COVID lockdowns.

Demonstrations erupted in at least seven cities – including Shanghai, Nanjing and Guangzhou – leading to violence between local cops and angry protesters.

In Shanghai, where one of the largest protests was held, people boldy asked for the resignation of President Xi Jinping, reported the Daily Mail.

The Chinese government has imposed another mass crackdown on the virus with crippling lockdowns, as the country suffers from another wave of Covid-19. China recorded 39,791 new cases spread across the country – the biggest one-day increase on record – including a record 4,307 in Beijing alone.

Due to Chinese government’s insistence on using its own vaccines, rather than approved foreign ones, it appears ill-equipped for the latest battle with COVID.

No alliance with AAP in Delhi for Lok Sabha polls: Sheila Dikshit