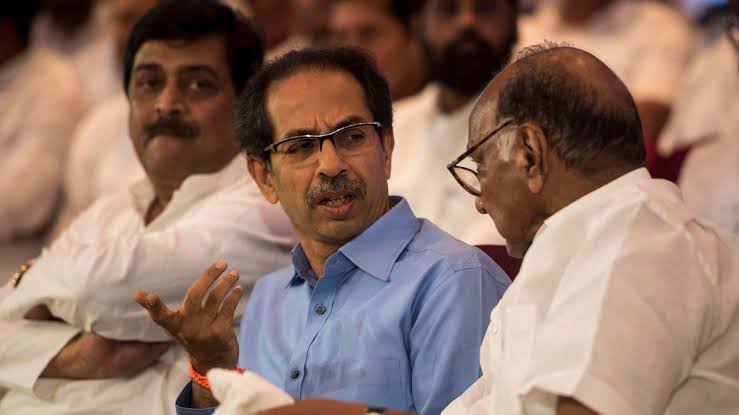 The saffron party leaders have been predicting the fall of the Maha Vikas Aghadi (MVA) government since it took over two years back.

Speaking at a meeting in Jaipur, Mr. Rane, the Minister of Micro, Small and Medium Enterprises (MSME) said he was merely endorsing what the BJP’s Maharashtra unit chief Chandrakant Patil had predicted earlier.

Sanjay Raut, an MP from Maharashtra’s ruling Shiv Sena, contemptuously dismissed Patil’s claim saying he has said it “at least 28 times before.”

Another senior Sena leader, Dr Raghunath Kuchik – accorded MoS status – said all the BJP leaders are crying over spilt milk, how “the Sena betrayed BJP” at least five times daily – or over 3,500 times in the past two years after the MVA government with Chief Minister Uddhav Thackeray took office on November 28, 2019.

The Shiv Sena leaders are not entirely wrong here. Since the Uddhav Thackeray-led party broke its two decades old alliance with the BJP after 2019 assembly elections, and teamed up with ideological adversaries Congress and NCP, the saffron party leaders have been predicting the fall of the Maha Vikas Aghadi (MVA) government in Maharashtra. Several BJP leaders, in the last two years, have made different predictions about the survival of the MVA government. The MVA government, which many political pundits predicted would not survive even six months after the formation, has completed two years in power today.

The picture that became symbolic of the tripartite MVA alliance- Sharad Pawar from the NCP, Uddhav Thackeray from the Shiv Sena and Balasaheb Thorat from the Congress.

One man at the centre of such unorthodox coalition was veteran politician Sharad Pawar. Sharad Pawar, from leading the negotiations between three ideologically distinct parties to thwarting a short coup by nephew Ajit Pawar, has made sure that the BJP is kept out of power in Maharashtra.

Pawar is undoubtedly the architect of the Maha Vikas Aghadi coalition. He played a vital role in ensuring that no MLAs of the coalition were poached by the BJP, not only during the one month drama and uncertainty post the assembly elections, but also after the government was formed.

Time and again, dismissing the BJP’s predictions of fall of MVA, Pawar has been very confident that the government will complete its full tenure of five years.

In a party event earlier this year, Pawar said: “Earlier, no one would have thought that the NCP can work with the Shiv Sena. But, we established a government with a different ideology and fortunately, people have accepted it … history shows that the Shiv Sena can be trusted.”

He added: “This government will work for five years, and not just five years, but will work together in the Lok Sabha and assembly elections with more enthusiasm, unitedly representing the common man in the state and the country. I have no doubt about it.”

A picture from an event called “We 162” arranged for the show of strength of MVA coalition.

For the first time Chief Minister Uddhav Thackeray and the unusual tripartite setup, the two years of governance have been very challenging. Even before the new government could complete its honeymoon period, the country was hit with the Covid-19 pandemic. Maharashtra was the worst-hit state by the virus and the government needed to act fast and responsibly. Along with Rajesh Tope, the health minister from the NCP, CM Uddhav Thackeray appeared regularly in television addresses, informing and guiding people on how to go about fighting this crisis.

“We did not panic either during man-made or natural calamities and our focus has remained on ensuring the welfare of the common public… There was no negativity in the Government or the administration while tackling the pandemic,” Uddhav Thackeray said on the completion of two years in the government.

Apart from the Covid-19 crisis, the coalition has remained stable despite different ideological leanings of its constituents, unresolved tricky issues like Maratha reservation and an aggressive BJP, which every now and then predicts an ‘operation lotus’.

A new episode of political drama began amid the second wave of the pandemic when an SUV with explosives was found near the south Mumbai residence of industrialist Mukesh Ambani. It led to the arrest of ‘encounter specialist’ police officer Sachin Waze and transfer of IPS officer Param Bir Singh from the post of Mumbai police commissioner. Singh, in turn, accused then home minister Anil Deshmukh of the NCP of corruption. Deshmukh denied the allegations but had to step down, and remains in custody at present.

Along with Deshmukh, at least dozen other leaders from the coalition are under the scanner of different central agencies, with some of them being summoned for questioning.

The drugs-on-cruise case in which Bollywood actor Shah Rukh Khan’s son Aryan was arrested created sensation, but later the Narcotics Control Bureau (NCB) and its Mumbai zonal director Sameer Wankhede found themselves in the dock as state minister Nawab Malik launched a tirade against them, claiming they were framing up innocent people. Allegations by a witness that there was an attempt to extort money to let off Aryan Khan provided ammunition to Malik.

Maharashtra CM Uddhav Thackeray during one of his televised addresses to the state in the middle of the pandemic.

A majority of big corporations in Maharashtra like Mumbai, Thane, Vasai-Virar, Pune, Pimpri-Chinchwad, Nashik, Aurangabad, Solapur, Amravati, Nagpur will go to polls next year. These polls will be a kind of referendum on the popularity of Thackeray government. Since the three parties are not on the same page on several issues and internal contradictions have been observed on many occasions, it will be interesting to see whether these parties crack a pre-poll alliance. A failure to do so will be seen as a weakness of the alliance by the BJP, which still remains a major force in Maharashtra politics. The BJP is hopeful that post the corporation elections, the MVA government will come down on its own because of the differences.

The Uttar Pradesh assembly elections, though fought far away with only Congress being a party fighting there among the three coalition partners, can have a decisive impact on the Maharashtra politics equation. If the BJP manages to win the UP polls, which are considered to be the key to Lok Sabha election victory, Shiv Sena will certainly think of revaluating its strategy. With Uddhav Thackeray at the helm of affairs in the state, the former BJP ally will either have to sacrifice the chief ministerial post and the tripartite government, or stick by the Congress and NCP to continue in power in the state and decide the future course of action after 2024 general elections.

In a recent survey by Marathi news channel Saam TV and Marathi daily Sakal, Uddhav Thackeray’s government seems to be popular in the state at present.

54.5% of those surveyed were of the opinion that the Sena’s decision to breakaway from the BJP and join hands with Congress and NCP was right. 33.1% evaluated Uddhav Thackeray’s work as CM as ‘excellent’, while 35.2 said they were satisfied with Thackeray’s work. Uddhav Thackeray remained the most popular CM face with 29.7% votes, followed by the leader of opposition Devendra Fadnavis with 22.4%.

The survey indicated that if the elections were to be held today, the BJP will emerge as a single largest party with 28% votes and 104 seats. The three alliance partners- Sena, NCP and Congress – will get 24%, 21% and 14% each, with 77, 59 and 40 seats respectively. The majority mark in Maharashtra legislative assembly is 145 seats.