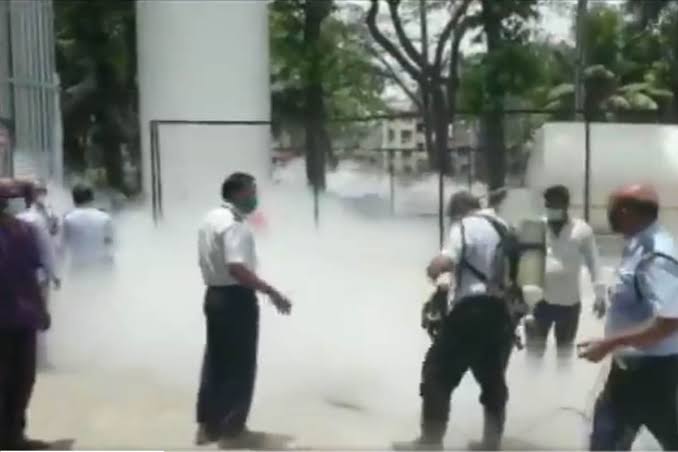 22 patients had to lose their lives due to the disruption caused in oxygen supply to hospital for 30 minutes.

Nashik| After an oxygen tanker leaked outside a hospital in Maharashtra’s Nashik, 22 patients had to lose their lives due to the disruption caused in oxygen supply to hospital for 30 minutes.

“As per current information, 22 people have died due to the interrupted supply of oxygen at the Zakir Hussain municipal hospital,” district collector Suraj Mandhare told NDTV

The incident occurred at the city’s Zakir Hussain Hospital.

Out of 80 who need oxygen, around 31 patients have been shifted to other hospitals.

The leak caused panic in the area as the gas spread in the vicinity. Fire trucks were rushed to the spot to stop the leak. An operation is underway to control the leak.

#WATCH | An Oxygen tanker leaked while tankers were being filled at Dr Zakir Hussain Hospital in Nashik, Maharashtra. Officials are present at the spot, operation to contain the leak is underway. Details awaited. pic.twitter.com/zsxnJscmBp

Majeed Memon, the Nationalist Congress Party leader, tweeted that people responsible for the leak must be punished

“Leakage of Oxygen from tanker in Nasik has caused loss of several litres of oxygen and panic in the Hospital. Those responsible for negligence must be identified and punished,” Mr Memon tweeted.

“It’s an unfortunate incident. As per preliminary info, we’ve learnt that 11 people died. We’re trying to get a detailed report. We’ve ordered an enquiry as well. Those who are responsible will not be spared,” FDA Minister Dr Rajendra Shingane was quoted as saying by news agency ANI earlier in the day.