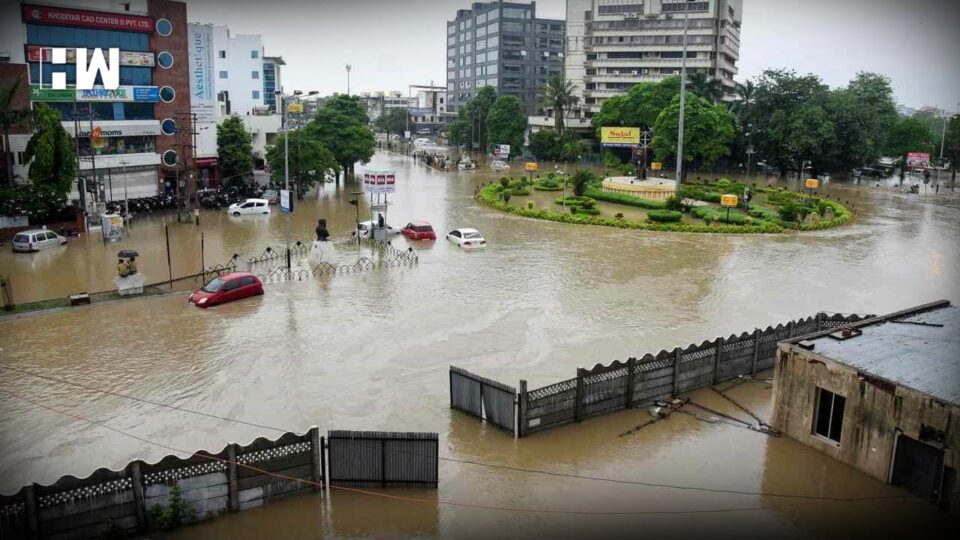 Over the last 24 hours, heavy rains lashed everal parts of districts in south and central Gujarat, including Ahmedabad, causing a flood-like situation in various low-lying areas. Officials said on Monday that over 6,000 people were shifted to safer places. PM Modi spoke to Gujarat CM Bhupendra Patel over a phone call and took details of the situation. The Gujarat Chief Minister’s Office (CMO) said in a statement that the Prime Minister assured Patel of all possible help from the central government.

388 roads, including state highways and panchayat roads had to be shut down owing to the widespread rainfall. Administration was busy in efforts to open them for the traffic. According to a government release, 13  of the National Disaster Response Force (NDRF) and 16 of the State Disaster Response Force (SDRF) have been deployed to carry out rescue operations. The government release also said thirteen dams have been put on ’high alert’ and eight on ’alert’ as their water level rose due to the heavy showers.

For the next five days, the Meteorological department has predicted heavy to very heavy rainfall with isolated extremely heavy showers in south Gujarat, and heavy downpour in central parts of the state and Saurashtra. On Sunday night, Ahmedabad city received 219 mm downpour, leading to water-logging in many residential areas and flooding on underpasses and roads. Several areas in the city were submerged in water, causing difficulties for commuters. Schools and colleges in Ahmedabad were also closed on Monday.

Due to the heavy downpour, Narmada and Chhota Udepur districts in central Gujarat, and Surat, Tapi and Valsad in south Gujarat have been affected badly. Revenue official Madhavi Mistry said a helicopter was used to rescue around 10 people from a village in Valsad district where they were stranded due to flooding in the Auranga river.

She further added that nearly 1,000 people were shifted to safer places from various rain-hit areas in Valsad and 15 rescued, five of them from an urban area. Bodeli taluka in Chhota Udepur district received 549 mm rainfall, whereas Kwant taluka received 432 mm rainfall in the 24-hour period till 6 am on Monday. This led to  water entering many areas.

Will be constrained to revoke ceasefire agreement: Hansraj Ahir