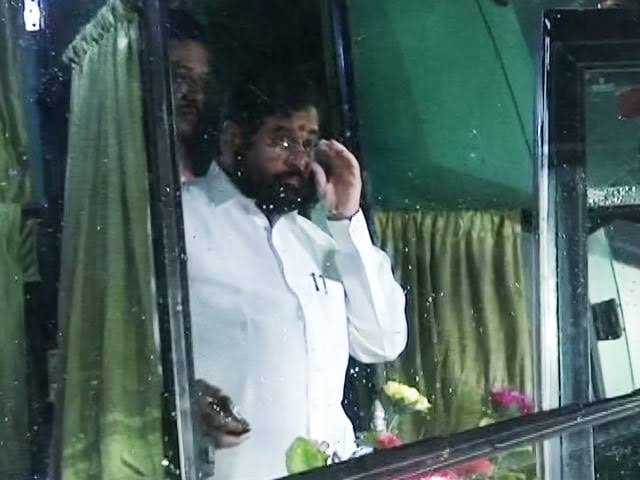 The senior Sena leader has claimed that he has backing of 40 of 56 Shiv Sena MLAs and six Independents.

Maharashtra Minister Eknath Shinde, who had rebelled yesterday against his own party Shiv Sena by moving some of the MLAs to a hotel in Surat,  arrived in Guwahati in BJP-ruled Assam early this morning with the MLAs. Mr Shinde and the other MLAs were reportedly received by BJP leaders Sushanta Borgohain and Pallab Lochan Das.

According to reports, the senior Sena leader has claimed that he has backing of 40 of 56 Shiv Sena MLAs and six Independents. In order to avoid disqualification in anti-defection law, Mr Shinde needs support of atleast 37 MLAs.

Before moving to Assam’s Guwahati, Mr Shinde, along with other MLAs, was staying in Surat of BJP-ruled Gujarat, where Shiv Sena had sent few of its leaders to initiate a negotiation with them. However, that move did not bear any fruit for the Mumbai-based party. Mr Shinde moved with MLAs to Assam even after he reportedly had a telephonic conversation with Maharashtra Chief Minister Uddhav Thackeray.

According to reports, Mr Shinde has been insisting for Sena to return back to the old alliance with BJP by doing away with current allies the NCP and Congress. He conveyed the similar message in his call with Thackeray. The BJP, as per reports, has moved the MLAs to Assam, to avoid them from further confrontation with other Shiv Sena leaders.

Earlier on Tuesday, the Shiv Sena had sacked Mr Shinde as party’s Chief Whip. The leader from Maharashtra’s Thane retorted by removing Shiv Sena’s name from his Twitter bio.

Have reports of terrorists being trained to carry out operations through sea: Navy chief

PM Modi has given free hand to forces to act against terrorists: Javadekar