Mumbai: These days Maharashtra politics is turning into a politics of unthinkable equations. Be it the Maha Vikas Aghadi of Shiv Sena, Congress, NCP or the more recent alliance of Shinde-Fadnavis. So it is shouldn’t be surprising that Hindutvawadi Shiv Sena UBT and Ambedkarite Vanchit Bahujan Aghadi aka VBA come together. But it definitely is worth more attention, especially, given the timing of it.

On Monday January 23, Shivsena UBT chief Uddhav Thackeray and Prakash Ambedkar of VBA held a joint Press Conference to announce their alliance. Also, talks between the two were going on for the last one and a half month, however, nothing was being finalized until Monday, January 23. 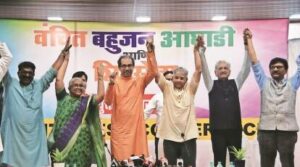 The two leaders made the alliance official. The date is quite significant as on Monday January 23 was 93rd birth anniversary of Shivsena founder Bal Thackeray. While Thackeray said that the two parties have come together to keep democracy alive, Prakash Ambedkar said that the reason for the alliance is to effect the politics of change in the State. It is essential to discuss about the prospects of this alliance given the fact that the BMC elections are on the cards.

“Shiv Sena and we have decided, now we only have to announce it together” earlier this month Prakash Ambedkar made this statement, putting a stamp on the speculations in political corridors. Uddhav Thackeray and Prakash Ambedkar appeared on the same stage during an event related to Prabodhankar Thackeray last November. In the same program, Thackeray also made a public offer to Ambedkar to form an alliance. After that, both of them met each other many a times. The talks between Shiv Sena and Vanchit Bahujan Aghadi office bearers were also going on. Today, the alliance became official. And the first test of this alliance will be the upcoming BMC elections.

Prakash Ambedkar had already shown willingness to accept as many seats as Shiv Sena is ready to give.

But before going into the analysis of the present-day alliance let us skim and scan the interesting history behind the coming together of these two.

Shivsena that carries the legacy of Balasaheb Thackeray brand of Hindutva and VBA that carries the ideological values established by Dr Babasaheb Ambedkar. Their alliance to many comes as a surprise. Given the current political situation in Maharashtra, Uddhav Thackeray has no other option. But even so, the experiment of Shivashakti and Bhimshakti is not a new idea. Shivsena’s founder Balasaheb Thackeray had also done a similar experiment in the seventies.

However, the coming together of two different ideologies has an even older history.

Uddhav Thackeray is grandson of Keshav Thackeray and Prakash Ambedkar is grandson of Dr Babasaheb Ambedkar. One is Prabodhankar (enlightener) and the other is Ghatnakar (Constitutionalist). Both are contemporaries, belonging to the same era. Both from Mumbai’s Dadar. Both had many mutual friends. You will find many examples in history of both challenging the Brahminical hierarchy in the then society through their works and writings.

Be it the active support of Prabodhankar to initiate puja by untouchables at the public Ganeshotsav event in Dadar or Babasaheb’s support to Samyukta Maharashtra Movement launched by Prabodhankar, there are many examples that show the mutual support and admiration both Prabodhankar Thackeray and Babasaheb Ambedkar had for each other.

Later, even after Balasaheb Thackeray, son of Prabodhanakar Thackeray, founded Shiv Sena, there were attempts to make Shiv Shakti and Bhim Shakti experiments work. In 1970, after the alliance with the Praja Samajwadi Party broke up, Shiv Sena formed an alliance with the Ra Su Gavai faction of the Republican party. But after the emergence of Dalit Panthers, the tussle between Dalit Panthers and Shiv Sena started to escalate. In 1987-88 A controversy broke out over the book Riddles in Hinduism written by Dr. Babasaheb Ambedkar. In this too, Dalit Panthers and Shiv Sena locked horns with each other. But Balasaheb Thackeray went a step back and the dispute was settled. After that, in an article in Marmik, a magazine by Sena,  Balasaheb took a conciliatory stance saying that now that the dispute is over, let’s talk.

But the most remembered and much talked about experiment of Shiv Shakti and Bhim Shakti happened when in 2011 alliance was formed between Shiv Sena and Ramdas Athawale. Ramdas Athawale is now with BJP.But will this experiment of Prakash Ambedkar and Uddhav Thackeray be successful again? This is the question.

As we know Shiv Sena’s performance in the election but what about the Vanchit Bahujan Aghadi?

After the formation of the party in 2018, under the leadership of Prakash Ambedkar, the candidates contested 2 important elections. 2019 Lok Sabha Elections and Maharashtra Assembly Elections. In the very first Lok Sabha election, the candidate performed well. In this election, Ambedkar had joined hands with Owaisi’s AIMIM. In many seats in Vidarbha and Marathwada, the party got votes in lakhs. Vanchit got a total of 50 lakh votes in this election and the vote share was 4.57%. Although the alliance with AIMIM did not last in the Legislative Assembly, it seems that in many seats in Mumbai, VBA got votes more than or equal to MNS. 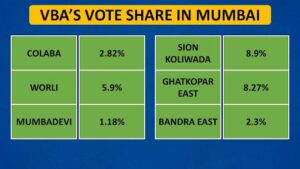 Although this vote share is very less compared to other parties, Thackeray seems to be eyeing the small but important vote bank now, given the vacuum created by the split in the Shiv Sena after Shinde’s rebellion. Against this backdrop, Aditya Thackeray’s meeting with Bihar’s Tejashwi Yadav seems to have been done keeping North Indian voters in Mumbai in mind.

But then what about Mahavikas Aghadi?

This question is obvious. Shiv Sena, is already part of Maha Vikas Aghadi along with Congress and NCP. When asked about this in today’s Press conference, Uddhav Thackeray showed positive signs. He is keen that VBA becomes a part of MVA. In Loksabha elections in 2019, VBA dented Congress-NCP alliance in as many as 11 seats whereas in the Assembly elections the same year, it dented the alliance’s prospect in 25 seats. Moreover, Ambedkar’s stance so far has been anti-NCP and anti-Pawar. Although he is ready to mend the ways now. it is not yet clear whether Congress and NCP are onboard with this idea. 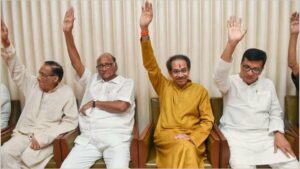 “We totally welcome the entry of Prakash Ambedkar’s alliance with Shiva Sena, it is a welcome move for the people who are against the ideologies of RSS and BJP, which the people of Maharashtra will surely approve”, said MPCC Working President Charan Singh Sapra while speaking to HW News

Meanwhile, NCP leader Vidya while speaking to HW News said, “It was Sharad Pawar’s big move to bring NCP and Shiv Sena together, although our ideologies differed. But now when see the political situation in our State, oppositions has to come together to fight against BJP and RSS”.

There are many such questions before the army.

Therefore, this alliance move of Uddhav Thackeray should be called a walk on eggshells.

On the other hand, Eknath Shinde too has experimented with Shivshakti-Bhimshakti even before Thackeray. Earlier this month, he announced an alliance with People’s Republican Party chief Jogendra Kawade. So, it will be important to see which of these 2 Bhimshakti-Shiva Shakti experiments will prove to be successful.

Tennis Ace Sania Mirza To Hang Her Boots Next Month