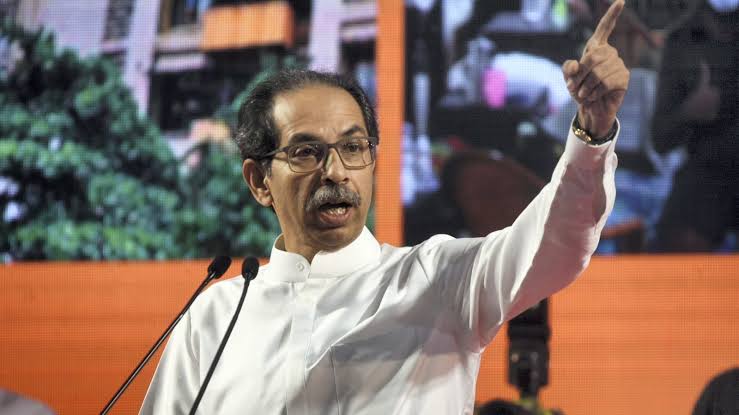 Mumbai: Shiva Sena supremo Uddhav Thackeray, now coming to terms with the recent rebellion in the party by Eknath Shinde and others, launched an all-out attack on Wednesday against the ruling Bharatiya Janata Party (BJP) and the rebel Shinde fraction. Thackeray, without taking any names, called the BJP’s leaders “vultures” wanting a bite of Mumbai.

In an address to party office-bearers ahead of the important BMC elections, the Sena chief accused the BJP of selling Mumbaiand challenged Union home minister Amit Shah to try every tactic to beat the ruling party in the civic body.

Speaking at a massive rally at NESCO, Goregaon, Uddhav Thackeray dared the BJP’s strategists to try to divide people on the lines of community and religion. “People from all walks of life, community and religion, especially Muslims are with us. If you have guts, tell your cronies here to take BMC and Assembly elections together in one month to see who the city voters prefer.”

Accusing the BJP of behaving like “vultures”, Thackeray said: “The vultures are roaming around the city. They want a bite of the city; they want to swallow it. This isn’t new, it has been happening for years.”

Thackeray, meanwhile, reminded the contribution of his grandfather in the Samyukta Maharashtra Movement, said several people have laid down their lives to keep Mumbai with Maharashtra.

“Many Shahs have attacked this country. There is one from the same family who has asked his party workers to ground the Sena. But he doesn’t know that the grass here is also like a sword. If you come marching at us, we will send you to the skies,” the Sena supremo said, in a direct attack against Union Home Minister Amit Shah.

Frequently referring the Shinde fraction as ‘Mindhe Group’ (under obligation) in his speech, Thackeray said he will cut through them at the “Dussehra rally which will happen at Shivaji Park at any cost”. Thackeray gave a clear message to party cadre to move ahead with the preparations of the rally at iconic Shivaji park even if they are denied permission to use it for the party’s annual rally on October 5.

The BJP always treated Mumbai as land parcel that can be sold, Thackeray alleged, adding: “But for us, it is our motherland. There are some children [Shinde group] who are out to sell the mother. They should understand that any such attempt will make us cut open their guts [in politics].”

“Sadly, we had an alliance with them and gave them everything though they did nothing substantial. I would repeat here that we rotted for 25 years in the alliance,” the formed CM said, while appealing to party workers to take his governments—state and in the BMC—to every doorstep, as he did not advertise his work like the BJP did with bringing Cheetahs to India.