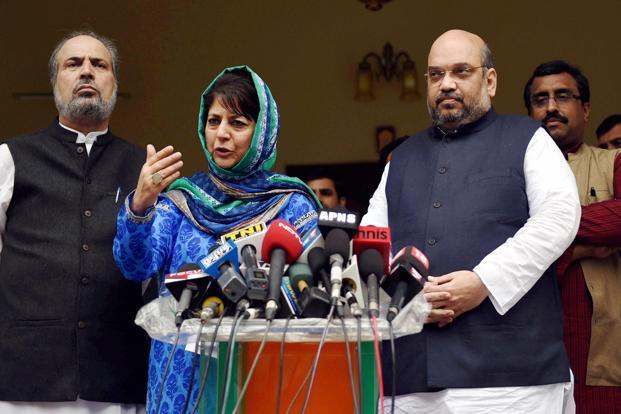 Jammu | The National Conference today congratulated BJP chief Amit Shah for bravely admitting the failures of the PDP-BJP coalition government in Jammu and Kashmir, even as it questioned the “national interest” propagated by the saffron party.

One gets astonished when in 2015, the BJP formed government with PDP in the state, they said it was in the interest of the nation. When they withdrew support from the government, they again said it was done in the national interest,” Devender Singh Rana, provincial president of National Conference, told reporters at party headquarters here.

The BJP had on June 19 pulled out of its alliance with the PDP in Jammu and Kashmir, saying it had become impossible to continue in the government in view of the growing radicalism and terrorism in the state.

As per the statement of the BJP president here yesterday, he admitted that it failed to deliver on its promises to the people of Jammu and Ladakh, and withdrew from the government in the national interest,” Rana said.

One fails to understand what is the definition of ‘national interest’ for the BJP- whether it is the interest of the BJP as a party or based on its election agenda, the NC leader said.

Rana was reacting to Shah’s statement at a rally here yesterday wherein he said that the BJP pulled out of the coalition government in view of the deteriorating law-and-order situation and failure of the state to ensure an equitable development, especially of the Jammu and Ladakh regions.

The NC provincial president congratulated Shah for admitting the failure of the coalition government, but questioned the BJP chief on what stopped the saffron party from fulfilling the promises made to the people of the winter capital (Jammu), who gave 25 seats to the party in the last state assembly elections.

You were in power at the Centre and in the state…Prime Minister Narendra Modi, you (Shah), home minister and other Union ministers visited the state a dozen times, but never raised the issue of ‘discrimination’ against Jammu and Ladakh and so did your ministers and legislators in the cabinet and assembly,” the NC leader said.

Rana also hit out at the BJP for taking credit of eliminating many militants during its four years of rule at the Centre.

On one hand, the BJP is taking credit for killing more terrorists in Jammu and Kashmir, on the other hand, it is claiming that Mehbooba Mufti had a soft approach towards militancy,” he said.

Shah had said that the number of terrorists killed in the state in the last four years under the Narendra Modi-led government at the Centre was the highest.

The NC leader also made an appeal to Governor N N Vohra to dissolve the state assembly as early as possible.

(Rising Kashmir editor) Shujaat Bukhari’s assassination is a blot and very unfortunate. Media is the fourth pillar of democracy and has performed its duties under trying circumstances over the past two-and-a-half decades,” Rana added.

Singh had in a controversial statement on Friday warned Kashmiri journalists to draw a line between reporting facts and supporting terrorists or face the fate of Rising Kashmir editor Shujaat Bukhari, who was shot dead by militants.

Congress walkout in UP Assembly over ‘demolition’ of temples in Varanasi