New Delhi: As protests against the ‘Agnipath’ initiative grow across the country, Congress chief Sonia Gandhi called the scheme “directionless” and called for peaceful protests on Saturday.

“I’m sad that the government ignored your voice and announced a new scheme that is completely directionless… I appeal to all of you to protest peacefully in a non-violent manner. Indian National Congress is with you,” Gandhi, who is hospitalised with COVID-19 issues, said in a letter. 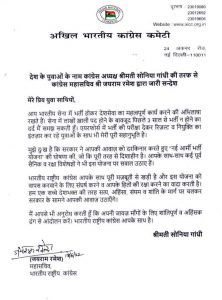 Gandhi also said that Congress pledges to stand with protesting youths and work for the withdrawal of the scheme.

Several states around the country have seen violent protests against the programme, which generally provides for a four-year contract with no pensions or other perks provided to regular soldiers.

The administration announced the scheme on Tuesday, saying that young people aged 17 and a half to 21 will be inducted for a four-year stint in the Army, Navy, and Air Force, with 25% of them being later inducted for regular service.

‘Agniveer’ is the name given to the adolescents who would be recruited under the new scheme.

The government later increased the upper age limit for Agnipath recruitment to 23 years in 2022.

The Ministry of Home Affairs (MHA) announced earlier today that 10% of slots in the CAPFs and Assam Rifles will be reserved for ‘Agniveers.’

Modi govt not creating jobs but destroying them: Congress

After Mukul Roy, his son on the way of joining BJP