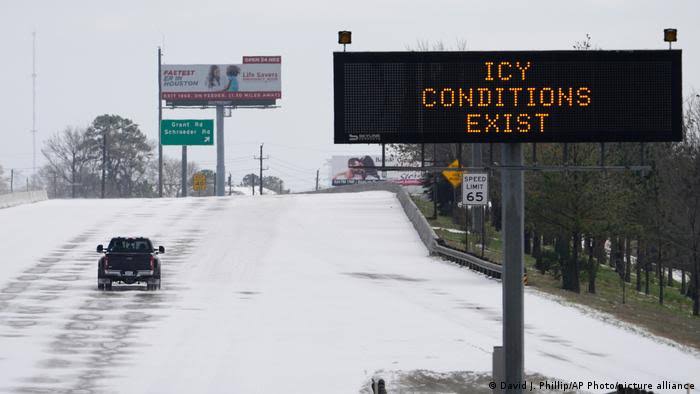 The snowstorm closed dangerously snowy and slick highways and put the delivery of new COVID-19 vaccine shipments on hold.

The last week knocked out power to more than 2 million people in Texas of United States as frigid blast of winter weather across the country pushed the state into an unusually icy emergency. The snowstorm closed dangerously snowy and slick highways and put the delivery of new COVID-19 vaccine shipments on hold.

Temperatures in the state dipped down into the single-digits as far south as San Antonio, as households that had suffered power cuts for hours did not certainly know when the lights and heat would come back on. The chaos was reportedly caused due to the state’s overwhelmed power grid throttled into rotating blackouts that are typically only seen in 100-degree Fahrenheit (38-degree Celsius) summers.

While spreading across the Ohio Valley and to the Northeast, the storm brought snow, sleet and freezing rain to the southern Plains.

According to the report by AP, Jason Frtado, a professor of meteorology at the University of Oklahoma, said: “We’re living through a really historic event going on right now.”

“This event was well beyond the design parameters for a typical, or even an extreme, Texas winter that you would normally plan for. And so that is really the result that we’re seeing,” Woodfin said.

State health officials said Texas expected to receive more than 400,000 additional vaccine last week, but now do not expect deliveries to occur until at least Wednesday. “Vaccination will resume as soon as it is safe,” said Douglas Loveday, a spokesman for the Texas Department of State Health Services.

Millions of Texans were waking up without safe drinking water Monday as state officials sought to ramp up bottled water distribution.

Texas authorities on Monday asked citizens and the local businesses to report the damage left behind by the last week’s devastating winter storms that hit the region. The financial toll may surpass Hurricane Harvey’s price to the response, which was approximately $19 billion in insured losses, according to the US insurance industry executives.