Citizens of Gujarat will be voting in two phases. The first phase is currently witnessing voting and the second phase will vote on December 5. The results will be out on December 8. In phase one citizens will vote for 89 seats.

56.88% voters turnout recorded till 5 pm in the first phase of #GujaratElections

(Visuals from a polling station in Rajkot) pic.twitter.com/Fz96qbSEZp

6:35 PM December 1: Barring a few minor incidents and some reports of problems in electronic voting machines (EVMs), the voting process, which commenced at 8 am, remained largely peaceful so far

4:55 PM December 1: JP Nadda said, “Gujarat election is going in the favour of BJP. There is immense love for PM Modi in the state. CM Bhupendra Patel has done the work of development in Gujarat. We have seen positive results in today’s polling.”

4:18 PM December 1: PM Modi says, “Himmatnagar shares a strong bond with BJP. Support from people is at an all-time high”

3:47 PM December 1: 48.48% voter turnout recorded till 3 pm in the first phase of Gujarat Elections 2022, as per the Election Commission of India

3:37 PM December 1: To ensure transparency in the elections, live webcasting of 13,065 polling stations in 19 districts is underway. “There will be continuous observation till the completion of the polling process through live webcasting of more than 50 per cent of polling booths in the state to keep a close watch on the voting process during the assembly elections in Gujarat,” said state chief electoral officer P Bharathi. He said that all arrangements have been made as per the instructions of the Election Commission. In the first phase, polling began at 25,430 polling stations, out of which there is live webcasting at 13,065 polling stations.

3:35 PM December 1: “Around 0.1 per cent ballot units, 0.1 per cent control units and 0.3 per cent VVPATs were replaced in three hours of voting. Reserve machine sets are available in all districts with the zonal officer in-charge of that area. Wherever a small or big problem occurs, arrangements have been made to replace them in no time,” Gujarat CEO’s office said in a release.

1:53 PM December 1: “We are the ones who divide the community, not the people. People of Porbandar know me and I have worked for each community,” Modhwadia said. Taking a dig at BJP he said that “in 27 years of their governance, nine out of 11 huge industries have been shut. There is unemployment and huge business have come to a standstill here.”

1:51 PM December 1: “People have taken a resolve to remove the BJP. The party knows about it that is why they changed the cabinet, including the chief minister, a year ago. There were allegations of corruption against them and now the new government is also functioning similarly. Hence, people are in a mood for change which they have created themselves,” Modhwadia said.

1:50 PM December 1: Congress candidate from Gujarat’s Porbandar constituency Arjun Modhwadia on Thursday cast his vote for the first phase of polling in the assembly election. Before casting his vote, Modhwadia told media persons that even the Bharatiya Janata Party is aware of the ‘people’s resolution to remove BJP’. 1:05 PM December 1: Amit Shah said, “Whenever the Congress has used inappropriate words against PM Modi, the people of Gujarat have given a reply through the ballot box. This time also the people of the state will give a reply.”

12:30 PM December 1: Prime Minister Narendra Modi addressing the rally at Kalol said the Congress party which does not believe in the existence of Ram Mandir and Ram, is calling me Ravan. 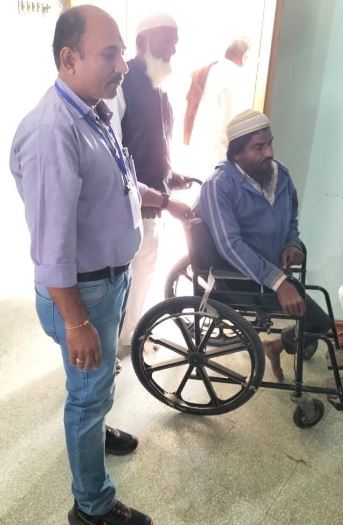 11:47 AM December 1: Former CM Vijay Rupani expressing confidence over BJP’s win said, “BJP will win all four seats of Rajkot. BJP candidates have done good campaigning. I appeal to people to cast their votes. Voting is necessary to safeguard democracy. I am confident that BJP is going to form govt in Gujarat for the seventh time. People have love and respect for PM Modi, they won’t go anywhere else.”

11:38 AM December 1: AAP leader from Gujarat Gopal Italia has alleged that voting is happening exceptionally slow in the Katargam assembly constituency in Gujarat. He is accusing BJP goons of pressuring electoral officials.

11:37 AM December 1: Union Health minister Mansukh Mandaviya interacted with villagers, before casting his vote, in Hanol village in Bhavnagar district.

PM Narendrabhai Modi speaking at Kaalol hails the way ongoing voting is taking place in the first phase of Gujarat assembly election. He especially takes note of voting by women early in the morning. PM says he is sure the voting in first phase will break all past records. pic.twitter.com/QocH693eCh

11:27 AM December 1: Gujarat CM Bhupendra Patel holds a roadshow in Mehsana. It will be voting in the second phase of the elections, to be held on December 5.

#GujaratAssemblyPolls | Gujarat CM Bhupendra Patel holds a roadshow in Mehsana. Mehsana will be voting in the second phase of the elections to be held on December 5. pic.twitter.com/enNamFZhC0

10:55 AM December 1: We are advocating a change. Chief ministers were changed, so they can feel anti-incumbency. There is a neck-to-neck fight here (Ankleshwar): Mumtaz Patel

10:44 AM December 1: Cricketer Ravindra Jadeja cast his vote at a polling station in Jamnagar.

Ravindra Jadeja says, "I appeal to the people to vote in large numbers." pic.twitter.com/TXyu2W8JoD

10:40 AM December 1: CM Bhupendra Patel appeals to people to vote. “As the first phase of Gujarat assembly elections is going on today, I appeal to all the voters to vote in large numbers and contribute to strengthening the democracy. Prime Minister Narendrabhai Modi has also had a telephonic conversation with me in this regard and wished me well,” Patel tweeted.

10:35 AM December 1: “Voting is being held on 89 seats in the first phase of Gujarat elections today. My appeal to all the voters of the assembly constituencies where voting is taking place in Gujarat today – You have a golden opportunity, do vote for the better future of Gujarat and your children, this time do something big,” says Arvind Kejriwal.

10:15 AM December 1: Former Gujarat CM Vijay Rupani after casting his vote with his wife Anjali 9:39 AM December 1: A total of 34,324 ballot units, an equal number of control units, and 38,749 Voter verifiable paper audit trail (VVPAT) machines are being used for the election in the first phase

9:35 AM December 1: Union Home Minister Amit Shah appealed to citizens of Gujarat to vote. He said, “In the last two decades, Gujarat has become synonymous with development and peace, which every Indian is proud of. But this was possible because of the strong government elected by the people of Gujarat. I appeal to the voters of the first phase to vote with unprecedented enthusiasm and numbers to continue this development journey”.

9:32 AM December 1: “Gujarat has been progressing and the people of the state have decided to vote for the BJP. People have trust in BJP and there’ll be more development in the state. BJP will form government in the state,” says Gujarat Fin Min Kanubhai Desai

9:30 AM December 1: Rajkot mayor Pradeep Dav after casting his vote.