After a party meeting, Rao announced that TRS is now BRS. Workers welcome this change by bursting crackers and splashing pink on the city of Hyderabad

Hyderabad: Telangana Chief Minister K Chandrasekhar Rao, aspires to a National Role ahead of the 2024 elections. Today he launched the Bharat Rashtra Samithi (BRS), a new version of his party, exactly at the recommended “auspicious time” of 1.19 pm.

After a party meeting, Rao announced that TRS is now BRS. Workers welcome this change by bursting crackers and splashing pink on the city of Hyderabad.

The “name-change” was conveyed to the Election Commission. EC has certain rules for recognizing any party as national.

To qualify as a national organisation, the new party must either have some sort of presence in at least four states or must have received 6% of the vote in any four states and four Lok Sabha seats. The party must also win 2% of the seats in the Lok Sabha in at least three states.

Currently, TRS has strong appearance in Telangana, as TRS rules the state. 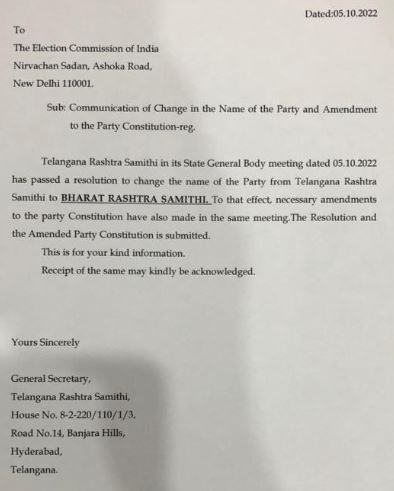 KCR has made it clear that he intends to challenge BJP in the upcoming elections.

But in a tweak in strategy, KCR has reached out to farmers’ bodies and trade unions for an alliance. This alliance will reflect the aspirations of different sections of the society.

The BRS could soon face its first election, although the Munugode byelection is scheduled for November 4 in Telangana. Additionally, the party is anticipated to run in the assembly elections in Delhi, Gujarat, Maharashtra, and Karnataka.

The party is still a long way from becoming a recognised national party, but it wants to keep its pink colour and electoral emblem of an automobile.

Bihar: Home Of A Prominent Police Officer Is Target Of Surveillance Raids