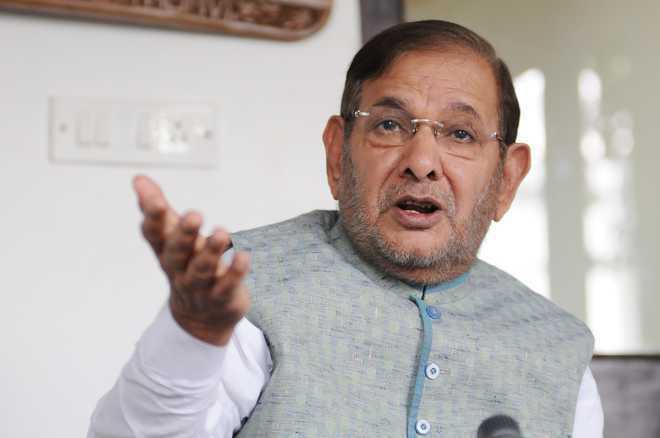 New Delhi: Launching Loktantrik Janata Dal, formed by his supporters, Sharad Yadav today said constitutional values faced a danger under the Modi government like never before and asked opposition parties to work together to defeat it in the next Lok Sabha poll.

Addressing a large number of party members on its Foundation Day, he claimed that opposition parties would not get another chance if the BJP came back to power as it would further curb constitutional rights of the people.

In a scathing attack on the NDA government at the Centre and Bihar Chief Minister Nitish Kumar, whom he accused of bringing “disgrace” to people of his state by “sitting in the lap” of the BJP, Yadav said the Modi dispensation has failed to fulfil key promises it had made and the ruling party now solely relied on “Hindu-Muslim” issues to come to power.

The former union minister himself is not a member of the new party as he is fighting a court battle to claim the election symbol of Kumar-led Janata Dal (United) but is believed to be the key man behind its formation.

Likening the BJP to a demon, whose life was in a bird, Yadav in his concluding address said the saffron party’s survival depended on communal issues.

“Hindu-Muslim issues are the only reason for its wins in elections,” he said.

Condemning the Karnataka governor’s decision to swear in BJP leader B S Yeddyurappa as the state’s chief minister, he said Governor Vajubhai Vala has been acting at the behest of the saffron party. The Yeddyurappa government will lose the floor test tomorrow, he said.

The current BJP has been grabbed by some people, he alleged, in an apparent reference to its top brass, and claimed that ministers at the Centre lived under fear and were afraid of speaking out.

It is an unprecedented crisis, Yadav said, adding that this was an “undeclared emergency” and thus more dangerous.

Making a distinction between the BJP when its key leaders were Atal Bihari Vajpayee and L K Advani and its function under the current leadership, he said Vajpayee resigned as prime minister after losing a trust motion by one vote while the party is now crushing people’s mandate in the southern state even as the Congress-JD(S) combine had 13 more MLAs than it.

“Out Constitution was prepared after our forefathers made a lot of sacrifice. You have adult franchise, freedom of expression due to this. Its values are now under a threat never seen in the 70 years since Independence,” he said.

Continuing his attack, Yadav added, “We should vow to remove this government in 2019. If they come to power again, there you will not allowed to hold meetings and make speeches (against them). I will make this plea to all parties. They won’t get a chance after 2019. There is no democracy in the BJP.”

If this government is not defeated, then those who made sacrifices for the country would be ashamed, he claimed.

Targeting Kumar, his longtime colleague before he rebelled last year against the Bihar chief minister’s decision to break ties with the RJD-Congress alliance and join hands with the BJP, Yadav said the JD(U) chief crushed people’s mandate with his move.

“He (Kumar) would say he will rather die than ally with the BJP again. He is still alive but has preferred to sit the lap of the BJP,” Yadav said.

“Nitish Kumar has brought disgrace to people of Bihar,” he said.

The BJP had promised to provide jobs to two crore people and give farmers 50 per cent more money than they spent in their produce but its government has completely failed on both fronts, he said.

“They forgot their promises and instead launched a campaign on Hindu-Muslim issues, triggered violence against Dalits and minorities,” Yadav said, referring to Jinnah portrait row, alleged lynching and controversial statements of ministers, including Anant Hegde’s claim that his party would change the Constitution. Hegde had later apologised.

The Centre’s crackdown on animal trade had resulted in stray cattle destroying farms, he claimed and added that instead of getting a better price for their products distressed farmers are forced to commit suicide due to a number of issues.

“Animals are like ATMs for farmers. This government has done a robbery on their ATMs,” he said.

Farmers, Dalits and minorities are facing a crisis and so is the economy, he said.

He also demanded that the government bring an ordinance to nullify a court ruling on the SC/ST (Prevention of Atrocities) Act. The court order, many have claimed, dilutes its provisions.