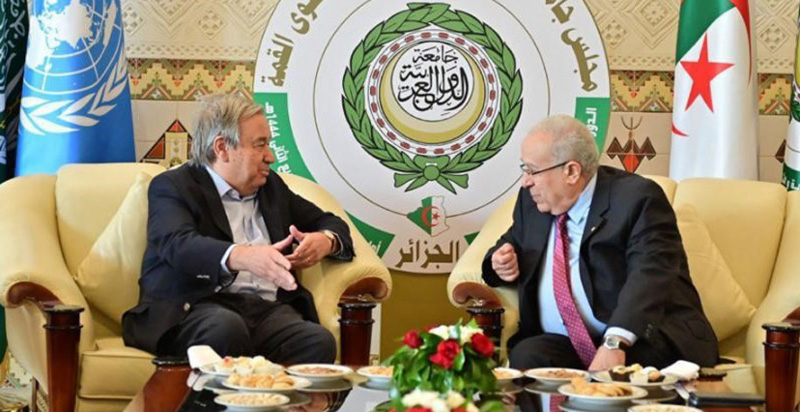 Amid growing geopolitical divides and deepening inequalities, cooperation is the only way forward, UN Secretary-General António Guterres said in Algiers on Tuesday, addressing the Summit of the League of Arab States.

The League is among the regional organizations which have a vital role to play in advancing peace, sustainable development, and human rights, he added.

Geopolitical divides are growing and inequalities and injustices are deepening.

Cooperation is the only way forward.

– @antonioguterres at the Summit of the League of Arab States. https://t.co/vk5LJUvbeN

Mr. Guterres also appealed for unity across the Arab world, which he said has never been more essential.

“Division opens the door to foreign, non-Arab, interference, to terrorism, to manipulation, and sectarian strife. But united, your leadership can shape a region that makes the most of its enormous potential and contributes to global peace and security,” he said.

The Secretary-General began his remarks by focusing attention on the continued suffering of the Palestinian people, underlining the UN’s clear position that peace must advance, and occupation must end.

“Our shared goal remains two States – Israel and Palestine – living side by side in peace and security, with Al-Quds/Jerusalem as the capital of both States,” he said.

The Secretary-General highlighted how developing countries require greater support today because they are not getting the financing they need.

Nations in the Arab world, Africa and beyond, are being weakened by conflicts, battered by the COVID-19 pandemic, and pummelled by the climate crisis.

Fallout from the war in Ukraine, in the form of soaring food and energy prices, spiralling inflation, and crushing debt, have added to the burden.

“I am pushing for an SDG stimulus – led by the G20 – to boost investment in sustainable development for emerging economies,” he said.

The goal is to increase liquidity, accelerate debt relief and restructure debt in ways that are comprehensive, effective and fair.

“We are also working non-stop with all relevant stakeholders on ending the suspension and on extending the Black Sea Grain Initiative and removing all remaining obstacles to the export of Russian food and fertilizers,” said Mr. Guterres.

The landmark deal has been vital to the Arab region, and the entire world, as food prices have dropped in its wake.

Russia’s decision at the weekend to suspend cooperation, saw prices immediately tick up.

“We must do all we can to ensure the continued success of the Black Sea Grain Initiative to provide relief to those in need, including countries in the Middle East and North Africa relying on accessible and affordable food and fertilizers — both from Ukraine and the Russian Federation,” he said.

The upcoming COP27 UN climate change conference – taking place in the heart of the Arab world in Egypt – represents another vital opportunity for restoring trust between developed and developing countries, Mr. Guterres continued.

The UN chief urged wealthier countries to be at the forefront of action to curb global temperature rise.

“They must reduce their emissions this decade – in line with keeping global warming to 1.5 degrees – and fully pivot to renewable energy. They must finally mobilize $100 billion annually to support developing countries build resilience,” he said.

Additionally, half of all climate finance must go towards adaptation, and the global community must urgently address climate impacts that are beyond countries’ abilities to adapt.

“I just came from Pakistan, and it broke my heart to see a flooded area that is three times the size of my own country, Portugal,” Mr. Guterres told the Summit.

He stated that action on ‘loss and damage’ is a moral imperative that must be front and centre at COP27, which opens this weekend in Sharm el-Sheikh.

“It is immoral and unreasonable to expect communities that did nothing to cause global heating to pay the price for climate impacts,” he said.

I see a light at the end of the tunnel for Nigeria : A UN Resident Coordinator blog

Adapt or starve: COP27 spotlights agriculture challenges and solutions in the face of climate change