Mr. Biden said, “It’s hard to even fathom,” said the US president. “It’s astounding. It’s an historic moment for science and technology, for America and all of humanity.”

The National Aeronautics and Space Administration has released an image of far-flung galaxies as they were 13bn years ago, the first glimpse from the most powerful telescope ever launched into space, which promises to reshape our understanding of the dawn of the universe.

The image is said to be the deepest, most detailed infrared view of the Universe to date, containing the light from galaxies that have taken many billions of years to reach us.

The small slice of the universe, called SMACS 0723, has been captured in sharp detail by the James Webb space telescope (JWST), showing the light from many different twinkling galaxies, among the oldest in the universe. US President Joe Biden, who unveiled the image at a White House event, called the moment “historic” and said it provided “a new window into the history of our universe”. 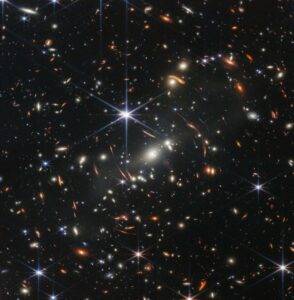 Mr. Biden said, “It’s hard to even fathom,” said the US president. “It’s astounding. It’s an historic moment for science and technology, for America and all of humanity.”

The $10bn telescope can get a sneak peek inside the atmospheres of exoplanets and observe some of the oldest galaxies in the universe by using a system of lenses, filters, and prisms to detect signals in the infrared spectrum, which are not visible to the human eye. The system has so far “performed flawlessly”, according to Marcia Rieke, professor of astronomy at the University of Arizona.

US Vice President Kamala Harris also expressed her excitement during the preview of the images. “This is a very exciting moment for all of us. Today is an exciting new chapter for the universe,” the vice president said.