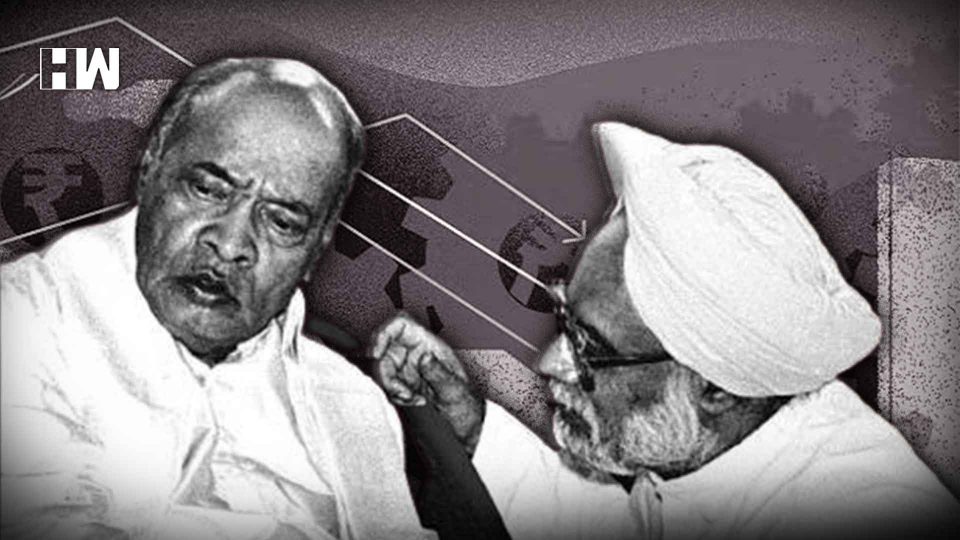 By the end of 1990, the situation was so dire that the Indian foreign exchange reserves could have barely financed three weeks’ worth of imports.

Thirty years ago, on this day, Dr Manmohan Singh presented the first Budget of the PV Narsimha Rao government, a Budget that would not only rejuvenate the troubled Indian economy but also change the face of the South Asian country in the coming years. After growing at just 3.5% per year for decades, India gave up its tag of being an economic laggard. This transition is known to most of us as ‘liberalisation‘. Behind this transition of Indian economy were two men- India’s 9th Prime Minister PV Narasimha Rao, who had almost given up his political career to head a monastic order in Tamil Nadu, and Dr Manmohan Singh, an economist and academic who never really intended to join politics.

Poor economic policies, inefficient public sector units, and the resulting trade deficits leading to balance of payments crisis were some of the major reasons why Indian economy was in doldrums in the 80s. In 1985, as the imports swelled, India’s economic problems started worsening.

By the end of 1990, the situation was so dire that the Indian foreign exchange reserves could have barely financed three weeks’ worth of imports. Meanwhile, the government came close to defaulting on its own financial obligations. While the low reserves led to a sharp depreciation/devaluation of the rupee, the Chandra Shekhar government could not pass the budget in February 1991 after Moody downgraded India’s bond ratings. The ratings further deteriorated due to the unsuccessful passage of the budget. This made it impossible for the country to seek short term loans and exacerbated the existing economic crisis.

The World Bank and IMF also stopped their assistance, leaving the government with no option except to mortgage the country’s gold to avoid defaulting on payments.

In an attempt to seek an economic bailout from the IMF, the Indian government airlifted its national gold reserves amid the 1991 general assembly elections.

National sentiments were outraged and there was public outcry when it was learned that the government had pledged the country’s entire gold reserves against the loan. A chartered plane ferried the precious cargo to London between 21 May and 31 May 1991, jolting the country out of an economic slumber.

At present, when the Indian politics has been shaken by the ‘snooping’ allegations against the Modi government using Israeli spyware Pegasus, it becomes important to remember how PV Narasimha Rao, who was not even a contender of the top post, became the Indian Prime Minister.

In March 1991, two Haryana policemen were found sipping tea near the residence of then Leader of Opposition Rajiv Gandhi at 10 Janpath; this eventually led to the fall of the then Chandra Shekhar government.

The Congress alleged that the two plainclothes police personnel, belonging to the Haryana CID, had been snooping on Rajiv Gandhi. This soured relations to the extent that the Congress decided not to support Chandra Shekhar’s government in a confidence motion in Lok Sabha.

All this happened after Chandra Shekhar had taken over as Prime Minister, with the support of Rajiv Gandhi himself. The Congress was the largest party then, but not in government.

The Chandra Shekhar government fell and elections were declared for June, for Parliament and several states. However, Rajiv Gandhi was assassinated during the election campaign.

This is how PV Narasimha Rao, who was not even in the race to become the PM, got the top posting from the party.

How Dr Singh Became The Face Of Reforms?

According to Vinay Sitapati who has written a biography of Narasimha Rao, Half Lion, there was nothing in Rao’s political past that indicated that he would be a liberaliser.

Jairam Ramesh, who was OSD in Rao’s PMO during those transformative months in 1991, recalls his meeting with Rao the day after he became Congress president.

“He told me that he was not an expert on economic issues and that I should coordinate meetings with Pranab Mukherjee and keep briefing him on these subjects,” Ramesh writes in his book To The Brink and Back: India’s 1991 Story.

However, two days before he was sworn in as PM, Rao, who had confessed that he did not understand economics, realised the magnitude of the crisis in a couple of hours.

“He read a note given to him by cabinet secretary Naresh Chandra on the economic crisis. It took just a few hours for Rao to change his mind and become an economic liberaliser,” Vinay Sitapati says.

Ramesh recalls in his book, “When he saw the note, Narasimha Rao’s first response was: ‘Is the economic situation that bad?’ To this, Chandra’s response was, ‘No, sir, it’s worse’.”

Rao’s political genius instantly recognised the importance of these reforms and also realised that he needed a finance minister with immense credibility not just to convince the critics at home but also the doubters abroad.

This is how Dr Manmohan Singh came in the picture. As an economist with irreproachable integrity, Dr Singh was to be the face of reforms Rao intended to carry out.

“Both Rao and Manmohan were pillars of the ancient régime, stalwarts of the very system they set out to replace,” says Jairam Ramesh, who thought there could not have been a more unlikely duo playing harbingers of this fundamental change.

“They were also by nature introverts, without mass base, rallying power or political coteries, and together they oozed charisma that would not fill a 10 ml bottle. In a matter of few weeks, they would transform the country,” Ramesh writes.

Dr Singh would calm PM Rao when he baulked over different aspects of the reforms, like devaluation. “Right from the beginning, the prospect of devaluation horrified the prime minister. It was not surprising,” writes Ramesh.

It was so much so that after the first devaluation of the rupee of 7-9% against major currencies took place on July 1, and the second devaluation of about 11% was to happen on July 3, Rao perhaps could not sleep at night. The reason for this assumption is Rao, early in the morning, called Dr Singh to stall Step 2. But by 9.30 am, when Singh made the call to RBI deputy governor C Rangarajan, the devaluation had already been carried out.

“Embarrassed, Manmohan Singh offered to resign, saying, ‘Let the responsibility lie with me.’ Rao had always intended his finance minister as a scapegoat, but he did not want to sacrifice him just yet. ‘He backed me,’ says Manmohan Singh,” Vinay Sitapati wrote.

However, Dr Singh himself admitted that Rao was sceptical about the reforms and he had to pursuade him for the same. “I had to persuade him. I think he was a sceptic to begin with, but later on he was convinced that what we were doing was the right thing to do, that there was no other way out. But he wanted to sanctify the middle path—that we should undertake liberalization but also take care of the marginalized sections, the poor,” Singh is quoted as having said by his daughter Daman Singh in her book Strictly Personal: Manmohan and Gursharan.

“He also jokingly told me that if things worked well, we would all claim credit, and if things didn’t work out well, I would be sacked,” Dr Singh was quoted as saying.

Finance Minister Manmohan Singh’s 1991 Budget speech made no attempt to hide the extent of the economic crisis prevailing then.

“The new Government, which assumed office barely a month ago, inherited an economy in deep crisis. The balance of payments situation is precarious…We have been at the edge of precipice since December 1990 and more so since April 1991…The people of India have to face double digit inflation which hurts most the poorer sections of our society. In sum, the crisis in our economy is both acute and deep. We have not experienced anything similar in the history of independent India.”

“The current level of foreign exchange reserves, in the range of ₹2,500 crore, would suffice to finance imports for a mere fortnight,” Manmohan Singh said in his Budget speech.

This statistic went on to become the biggest artefact associated with the pre-reform economic crisis in 1991.

“There is no time to lose,” he said. “Neither the Government nor the economy can live beyond its means year after year. The room for manoeuvre, to live on borrowed money or time, does not exist any more.”

After outlining the various reform measures, Singh ended on a positive note.

“I suggest to this august House that the emergence of India as a major economic power in the world happens to be one such idea,” he said. “Let the whole world hear it loud and clear. India is now wide awake. We shall prevail. We shall overcome.”

In his essay The Road to the 1991 Industrial Policy Reforms and Beyond published in the collection India Transformed: 25 Years of Economic Reforms, former Reserve Bank of India deputy governor Rakesh Mohan (who was then working in the industry ministry) provides an account of Singh’s firm resolve to push the reform process.

“Within a few days of his appointment (as finance minister), Manmohan Singh called a meeting of all the secretaries of the major economic ministries and the chief economic adviser… Manmohan Singh outlined the full economic reform programme that was to be followed over the next five years — and more importantly, over the next six weeks. The latter included immediate action to be taken on industry policy. He said quite clearly that he had the full mandate of the Prime Minister to do whatever had to be done to solve the crisis… Since he knew that some of the mandarins present were not on board with the kind of liberalising economic reforms envisaged, he added: “If any of you have any difficulty with the proposed reform programme, we can find other things for you to do!” This was perhaps the most firm and forceful that I ever saw Dr Manmohan Singh.”

The Aftermath Of Reforms

The program of economic policy reform, taken up by then Prime Minister PV Narasimha Rao and his Finance Minister Manmohan Singh, who would later head two Congress-led governments for a decade, has yielded amazing results in the last thirty years, dramatically improving the quality of life in India. Trade liberalisation, however, has also corresponded with a dramatic rise in inequality and associated social issues.

“Your Officers Should Be Booked On Murder Charges”: Madras HC To Election Commission