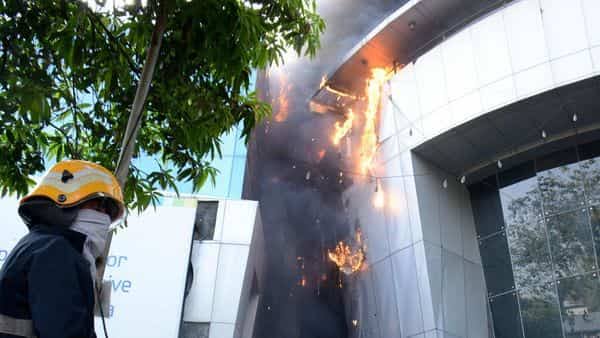 Uddhav Thackeray, the Maharashtra Chief Minister, has sought forgiveness from the families of those who died after the fire broke out.

Uddhav Thackeray, the Maharashtra Chief Minister, has sought forgiveness from the families of those who died after a fire broke out shortly after midnight at a coronavirus hospital in Mumbai, and said that they will get compensation of ₹ 5 lakh each. Currently on a visit to Bangladesh, Prime Minister Narendra Modi said he was “pained by the loss of lives” and would pray for the injured.

As per officials, 10 bodies have been recovered so far and around 70 patients, who were being treated for the virus – have been moved to safety from the Dreams Mall Sunrise Hospital – which was located on the fourth floor of a shopping mall in Mumbai’s Bhandup neighbourhood.

After visiting the scene of the disaster, Mr Thackeray told reporters: “The firefighters did a great job in rescuing people. However… some who were on ventilators could not be rescued. I seek forgiveness from their families.”

“Pained by the loss of lives due to a fire at a hospital in Mumbai. I pray that the injured recover soon,” the Prime Minister tweeted.

Pained by the loss of lives due to a fire at a hospital in Mumbai. I pray that the injured recover soon: PM @narendramodi

The hospital had been set up to deal with the wave of Covid infections that have swept the city; as at the peak of the first wave last year Mumbai was the worst-affected metro city in the country, with hospital beds and life-saving medical equipment in short supply, CM Thackeray said.

The hospital’s permit would have expired on March 31, the Chief Minister said.