Mumbai: Atal Bihari Vajpayee’s fourth death anniversary is marked today and leaders from all political parties remembered him and paid tribute. Atal Bihari Vajpayee, who served as prime minister for six years, from 1998 to 2004, passed away in 2018 at the age of 93.

In honor of the late prime minister and Bharat Ratna recipient, Prime Minister Narendra Modi, President Droupadi Murmu, and the just sworn-in Vice President Jagdeep Dhankar visited the Sadaiv Atal memorial garden in the Capital. “Vajpayee made pioneering efforts to modernize India and prepare our country for the challenges of the 21st century,” said PM Modi. Leaders of the opposition parties too honoured the BJP veteran.

Whenever someone recalls great people reaching the pinnacle of politics in the country, the name of former Prime Minister Atal Bihari Vajpayee definitely comes to everyone’s mind. The bittersweet bond that Vajpayee shared with Indira Gandhi is worth a recall. 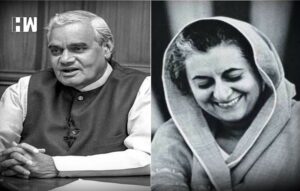 When Vajpayee took a jibe at Indira Gandhi:

It was in the year 1970 when Atal Bihari Vajpayee challenged Mrs. Gandhi to set her hair in five minutes. Actually, the story is of 26 February 1970. According to the book by senior journalist and author Kingshuk Nag, the then Prime Minister Indira Gandhi stood in the House and surrounded the Jana Sangh Party (currently BJP) at that time on the issue of ‘Indianness’ or ‘Indianism’ and mocked the party by saying, “I can tackle a party like Jana Sangh in just 5 minutes.” At that time Atal Bihari Vajpayee was the leader of Jana Sangh in the House. He gave a befitting reply to her comment on the party. Atal Ji stood up from his seat and said, ‘PM says she can deal with Jana Sangh in 5 minutes, can a democratic prime minister speak like that? I say that you can’t even fix your hair in 5 minutes then how will you deal with us.’ Political squabbles and rifts were often seen between Indira Gandhi and Atal Bihari Vajpayee.

When Vajpayee met Indira Gandhi after her defeat in 1977:

In 1977 after becoming the foreign minister, the very first thing Vajpayee did was that he visited Indira Gandhi’s house to assure her that the government would not retaliate her. Vajpayee took permission from Desai before meeting Indira Gandhi after much persuasion Desai granted him the permission.

As Mrs. Gandhi and her family were worried that she might be lynched by an angry mob, Vajpayee told Mrs. Gandhi that she would be treated fairly and no leader of the ruling party would incite violence against her or her family because people were so furious against her that even the slightest provocation could turn into anarchy in which people would take the law into their own hands. During the Emergency in Delhi alone, more than 20,000 people were persecuted.

Vajpayee’s assurance to Indira Gandhi was not just a saying, it was a ‘promise’ that was fulfilled.

Vajpayee used to say that even though he was one of Indira Gandhi’s most staunch critics in Parliament, their personal ties were unbreakable. After her death he had said, ‘Whenever I met Mrs. Gandhi, I felt as if she was in the grip of some unknown fear. There was a deep sense of insecurity in some corner of her mind. She use to keep an eye on everyone, she didn’t say anything openly probably thinking that the whole world was creating a vicious circle against her. All these things show that if we want to understand Indira Ji’s personality and works completely, then this has to be analyzed deeply.

“BJP will form the government in Jharkhand” says Raghubar Das

‘Bitcoin will not be accepted as Currency’: Finance Minister