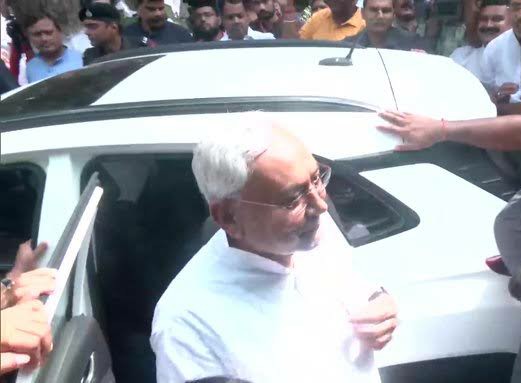 JD(U) Chief Nitish Kumar, after taking oath as the Chief Minister of Bihar on Wednesday, said leaders in his party were skeptical about the BJP’s intentions to weaken the party’s base, which led him to break his ties with the saffron party and join hands with Lalu Yadav’s RJD.

Talking to reporters in capital Patna, Mr Kumar said: “After the 2020 assembly polls result, I didn’t want to become the Chief Minister. But I was put under pressure by them (BJP) to take the responsibility. However, what followed after that was seen by everyone.”

Nitish Kumar, talking about attempts by BJP to weaken the JD(U), said: “Look at the seats we won in 2015 election. And look at what we were reduced to in 2020 election. There was anger in our leaders regarding that. We discussed it yesterday and took the decision.”

“Leaders in our party had a feeling that what was happening wasn’t right. In polls, our people supported them (BJP). But they made attempts to make us lose.”

“When people from our party said we should not continue like this, we decided to quit and go back to our old place (with RJD),” the Bihar CM said.

When asked about the difference between the NDA during the rule of Atal Bihari Vajpayee and Modi, Nitish Kumar said: “What are you talking about? There’s no comparison with respected Atal ji. When we went to NDA under leadership of George Fernandes, the amount of love and respect we got, we cannot forget that. Things were totally different during that era.”

Questioned about his ambitions to become candidate for Prime Minister, Nitish Kumar said, “No no, I am not staking claim for any candidature. But tell us one thing. He (Modi) won in 2014, will he able to continue after 2024?”

No such request has been made by PM Modi to Donald Trump, assures S Jaishankar in RS