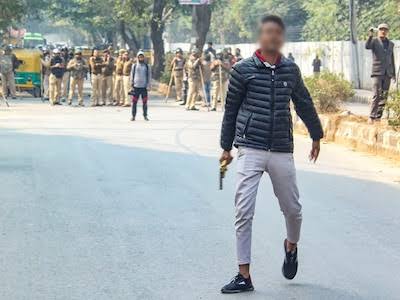 Rambhakt Gopal, the gunman who shot fire at Anti-CAA protesters in presence of Policemen and Media on Thursday in daylight has been taken by the police.

Rambhakt Gopal is identified as a 19-year-old man from Uttar Pradesh’s Jewar, near Delhi. Days after BJP MPs, including Home Minister, have repeatedly verbally attacked the protesters and some have even used hate speech and raised slogans like “Goli maro salo ko”, a gunman entered shaheen bagh protests and on Thursday another man open fired at the Anti-CAA protesters from Jamia University.

In the video Ram “Bhakt” Gopal can be seen walking on a heavily-guarded road, waving a gun as he shouts “Yeh lo azaadi (here’s your freedom)” at the protesters. He stood a stone’s throw away from dozens of policemen deployed outside the university, where protesters had gathered for a march. He also shouted “Delhi Police zindabad (Long live Delhi Police)”.

Before coming to the protest Rambhakt went live on FB and had written a number of posts with hate speech indicating some kind of violence on the protesters, mainly Muslim community.

He posted messages such as “On my final journey, there should be chants of ‘Jai Shri Ram’”, “I am the only Hindu here”, “I am giving freedom”, “Take care of my home”, “There is no Hindu media here”, “Shaheen Bagh, game over”.

The posts and the comments are very disturbing and alerts hate towards the protesters and the minorities in the country.

In his Facebook profile, he is seen with Deepak Sharma who is entrenched in BJP-RSS-VHP and also known to several BJP leaders including Union Minister Giriraj Singh. He had created a new profile a month ago to propagate the extremist ideas and the profile has now been deleted by Facebook. However, his old profile still exists, which also has the right extremists posts.