Gandhinagar: Gujarat voted in two phases on December 1 & 5, and today is the day when Gujarat’s fate will be decided. Who will win Gujarat this time? Since the last six elections BJP is winning over the state, will it win for the seventh time as well? The exit polls have predicted BJP’s win. But AAP & Congress have given BJP tough competition this time too. Himachal Pradesh too voted on November 12. Both states are ruled by BJP. The counting of votes will begin at 8 AM.

5:30 PM December 8: PM Modi said, “Thank you Gujarat. I am overcome with a lot of emotions seeing the phenomenal election results. People blessed politics of development and at the same time expressed a desire that they want this momentum to continue at a greater pace. I bow to Gujarat’s Jan Shakti.”

5:01 PM December 8: Himachal CM Jairam Thakor said, “I have handed over my resignation to the Governor. Will never stop working for the development of people. We need to analyze things. There were some issues that changed the direction of the results. I will go to Delhi if they call us”

4:56 PM December 8: A man from Odisha paints himself silver, as BJP wins over Gujarat. 4:50 PM December 8: Heartfelt thanks to the people of Himachal Pradesh for this decisive victory, says Rahul Gandhi

4:30 PM December 8: The Congress on Thursday appeared headed for a victory in Himachal Pradesh as it surged ahead of the ruling BJP, winning or leading in 39 of 68 assembly seats. In the latest results and trends available, the Congress won 26 seats and was leading in 13, while the ruling BJP had registered a win on 14 seats and was leading in 12 others. Three Independents also emerged victorious. The Aam Aadmi Party failed to open its account.

4:22 PM December 8: Mallikarjun Kharge said, “I am not taking credit for it. In a democracy wins and losses happen. It’s our ideological fight. We will correct the shortcomings and continue to fight.”

4:15 PM December 8: Gujarat votes for politics of development. Some years ago, here prevailed politics of vote banking, divide & rule because of which people were fed up and they started voting for BJP: Purnesh Modi, BJP candidate from Surat

4:05 PM December 8: Due to a debacle in assembly elections, Gujarat Congress in charge Raghu Sharma resigns.

4:01 PM December 8: Congress President J Thakor said, “It is true that AAP & Asaduddin Owaisi were one of the reasons behind the vote cut (of Congress)during the polls. We’ll hold a meeting soon to analyze the shortcomings. I hope the next govt will fulfill its promises.”

3:28 PM December 8: The BJP has garnered 53% of the votes counted in Gujarat, followed by the Congress with 27% and the AAP with 13% as of the midway point in the counting of votes. “Due to the votes given by the people of Gujarat, the AAP is today becoming a national party. The politics of education and health is making a mark for the first time in the country. Congratulations to the entire country on this,” he said in a tweet in Hindi.

3:23 PM December 8: “In Gujarat, the AAP spent a lot. My information says that the BJP funded the AAP to divide the Congress vote. Because the AAP contested the election, we lagged behind,” Siddaramaiah told reporters

2:24 PM December 8: Amit Shah said, “Gujarat has given an unprecedented mandate to PM Modi ji’s BJP, which has become the character of development and public welfare by rejecting those who indulged in hollow promises, revelry and appeasement. This massive victory has shown that every section be it women, youth or farmers, all are wholeheartedly with BJP.”

2:14 PM December 8: Congress party workers celebrate in Shimla after Congress crosses the majority mark of 35 seats in Himachal Pradesh amid the ongoing counting of the votes in the state.

#WATCH | Congress party workers celebrate in Shimla after Congress crosses the majority mark of 35 seats in Himachal Pradesh amid the ongoing counting of the votes in the state.#HimachalPradeshElections pic.twitter.com/1TklhepVnU

1:54 PM December 8: Congress celebrates outside the Delhi office as the party leads in Himachal.

#WATCH | Congress party workers celebrate at the Delhi office of the party after Congress crosses the majority mark of 35 seats In Himachal Pradesh amid the ongoing counting of the votes in the state.#HimachalPradeshElections pic.twitter.com/Cb3d3X4s2x

#WATCH | Gujarat: BJP workers celebrate in Surat as the party sweeps #GujaratAssemblyPolls. As per the official EC trends, BJP has won 5 seats and is leading on 150 of the total 182 seats in the state. pic.twitter.com/OULjOcwy3H

1:38 PM December 8: Congress wins 1 seat and leads on 39 others while BJP wins 4 and leads on 21 others; counting continues. 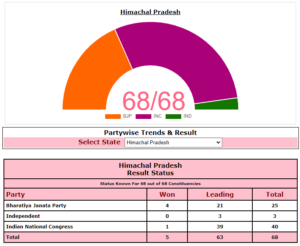 1:30 PM December 8: Workers gather at AICC headquarters after Himachal Pradesh results in trend in favor of Congress. Priyanka Gandhi Vadra did many rallies in Himachal.

1:07 PM December 8: Harsh Sanghvi said, “Gujarat has given the message, that the people of Gujarat & BJP will remain together. People of Gujarat gave a befitting reply to those who insulted the state. We’ll further aim to work for the progress of Gujarat.”

12:42 PM December 8: Gujarat election results: BJP candidate Kantilal Amrutia is leading from the Morbi assembly seat. Amrutia has got 54.19 percent votes so far, according to the Election Commission (EC) data.

12:50 PM December 8: “The people of Gujarat have made AAP a national party. We will get nearly 15 per cent vote share in this election. Gujarat is the bastion of PM Modi and Amit Shah. Gujarat is a lab of the BJP. The BJP has been in power in Gujarat for 27 years and intruding that fort was not an easy job. AAP has penetrated into the bastion of the BJP,” says Sanjay Singh AAP leader.

11:38 AM December 8: Gujarat assembly election results: BJP is now ahead in 154 seats while Congress is ahead in 17.

11:05 AM December 8: Rajnath Singh said, “We are creating a new record in Gujarat, there was no ‘anti-incumbency’ against us”.

10:40 AM December 8: To examine the situation in Himachal, BJP sends Vinod Tawde to Shimla.

10:22 AM December 8: In Gujarat, Congress headed for its worst-ever performance in Gujarat, as per trends.

10:09 AM December 8: Himachal elections result: The ruling BJP is leading in 20 seats and the Congress in 13 while Independent candidates are ahead on two seats in Himachal Pradesh, according to the Election Commission. Chief minister Jai Ram Thakur and Himachal Pradesh Congress president Pratibha Singh have maintained that their parties would get full majority with over 40 out of the 68 seats.

10:05 AM December 8: Visual of counting of votes at centers. 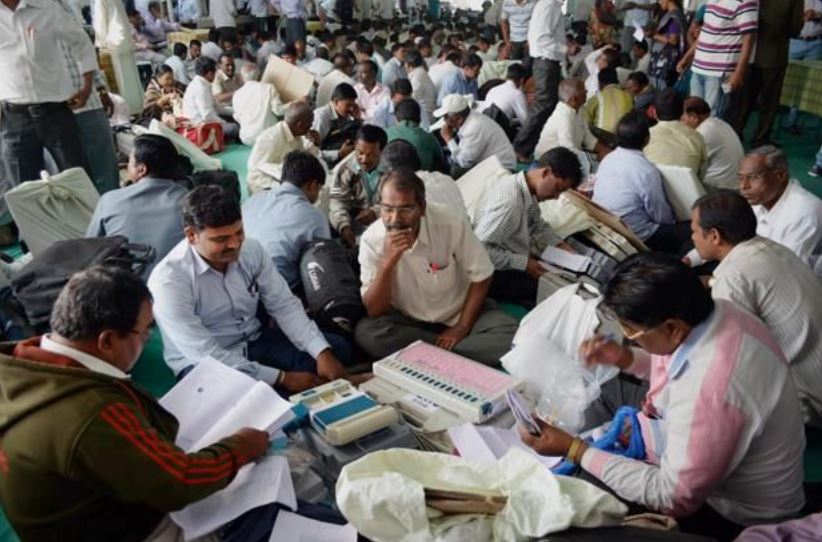 9:48 AM December 8: Himachal Election Result: The saffron party is ahead in 34 seats while Congress is leading in 31. Both BJP and Congress have claimed victory in the state which has had a tradition of changing governments for the past several years. If BJP wins then it will beat the anti-incumbency and change the trend of the alternate government in the state.

9:42 AM December 8: AAP hopes to get National Party status as they put up a poster stating so: 9:35 AM December 8: Himachal Election Results: Congress and BJP are both ahead in 33 seats each. Just two short of the magic figure of 35. Trends for all the seats are out

9:34 AM December 8: Gujarat results: BJP is in celebration mode already. The mood is upbeat at the party’s office in Gandhinagar as trends show BJP surging ahead of Congress and AAP in PM Modi’s home turf.

9:05 AM December 8: Gujarat assembly election result: In initial trends, AAP candidates are trailing in Katargam and Varachha Road behind BJP. These seats are in focus due to Patidar voters and AAP factor. From Katargam Gujarat AAP chief Gopal Italia is contesting against Vinod Moradiya. From Varachha Alpesh Kathiriya is contesting Kumar Kanani of BJP.

8:58 AM December 8: Himachal Pradesh election result 2022: Both BJP and Congress near half way mark.

8:52 AM December 8: Himachal Pradesh election result: Of the total 15 seats of Kangra district, Congress is leading on 9 seats while BJP on 6 seats.

8:48 AM December 8: “BJP will break records. It will get the maximum number of seats &the highest voting percentage. All our candidates will be ahead of their rival candidates by a huge margin. BJP will have a huge victory,” says Gujarat minister & BJP candidate from Surat West, Purnesh Modi

8:45 AM December 8: Gujarat Election Results: BJP ahead in 124 seats while Congress is leading in 50.

8:34 AM December 8: Himachal Election Results: The grand old party is leading in 27 seats while BJP is ahead in 22.

8:32 AM December 8: BJP is already ahead in nearly 100 seats while Congress is leading in 36. AAP is ahead by just 2. Will Exit Polls prediction come true?

8:19 AM December 8: BJP strong in Gujarat but close fight in Himachal.

8:18 AM December 8: Gujarat election results: BJP going strong. In postal ballot counting, BJP is ahead in 33 seats and Cong is leading in 6

8:17 AM December 8: Gujarat Election Results: BJP Ahead In 9 Seats. The BJP is gaining in nine seats in Gujarat, early leads showed shortly after the counting of votes through ballot votes began at 8 am. Congress, which ran a “silent campaign”, is down four seats.

8:11 AM December 8: Himachal election results: The first trends are here. BJP is ahead in 2 seats, Cong in 1

8:10 AM December 8: In Gujarat, BJP pulls ahead in first trends. The party is now leading in 6 seats. 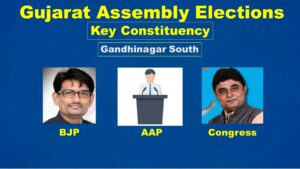 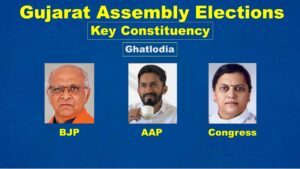 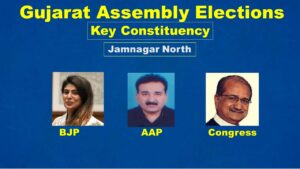 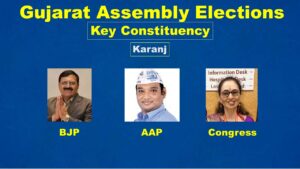 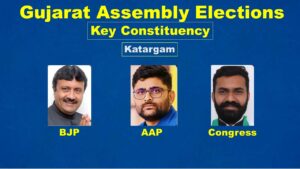 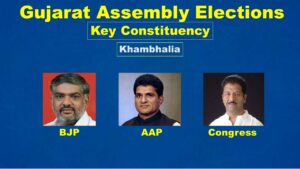 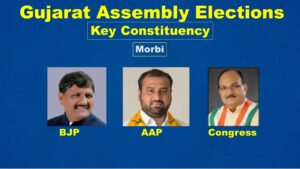 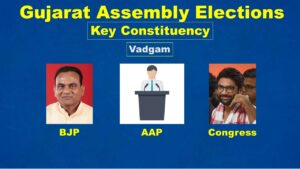 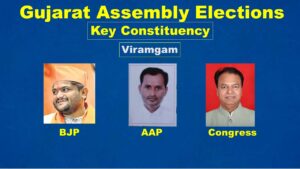 7:28 AM December 8: “We are definitely going to form the government (in Gujarat). Do you have any doubts?” says Hardik Patel. “Govt is formed on basis of work. No riots/terrorist attacks here in the past 20 yrs. People know BJP met their expectations. They press ‘Lotus’ as their future will be safe under BJP. It did good governance & strengthened this trust,” he added.